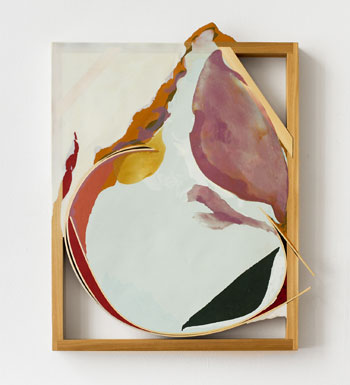 Gregory Lind Gallery is pleased to present split states, a new body of work by Christian Maychack. Maychack’s wall pieces are objects that inhabit the space between sculpture and painting; in eradicating yet emphasizing the distinction between the two, Maychack enables his pieces to hover in a state of indeterminacy and paradox. The suggestion of functionality is present, yet stripped of decisive purpose. These are works that question our ability to navigate the continuum between a functional physical space and abstract pictorial space, while supplying a new framework for a visual field.

In his new body of work, Maychack exposes stripped-down forms, devoid of metaphors. This continuation of his Compound Flat series delves more deeply into the lexicon of painting through the construction of wall objects. In these pieces (constructed of epoxy clay, pigment, and wood), surfaces become places where physical and sculptural, abstract and pictorial space, intersect. In Maychack’s work, the wood and that of the pigmented resin often conflict, only to cohere back into a unified composition in successive moments. Because color is used to connect disparate elements across spatial voids, the voids themselves often act as positive space. The dichotomy between painting and sculpture places the viewer in a similar space of uncertainty.

Fours (CF37) presents two disparate grids of four overlaid negative spaces. While the grid of the wooden structure is fixed, a grid of voids is organic and transient in comparison, reminiscent of light filtering through a window and making definite yet temporary and moveable arrangements on the floor. In Blue Divide (CF35) Maychack offers a cross-section of a split log woven into a blue field. On the surface, the log appears as if an image of itself. Simultaneously, the viewer is invited to look behind the surface to notice the thickness of the log, furthering Maychack’s theme of dimensional paradox.

More info at www.gregorylindgallery.com
Posted by KNF100 at 7:38 PM